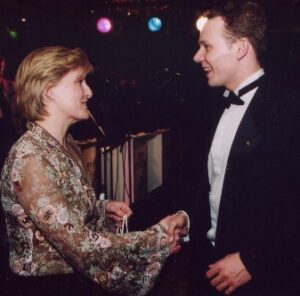 So he’s no Steve McQueen but our very own World Short Course 200m Butterfly Champion, James Hickman, was one of seven special guests who came out to support the valuable work of the Duke of Edinburgh’s Award at the prestigious Carlton Tower Hotel in London’s Knightsbridge on 25th February. The 27 yr old Mancunian who swims for City of Leeds was invited to attend the “Magnificent Seven” charity dinner, held in the presence of Their Royal Highnesses The Earl and Countess of Wessex, along with other high-achievers from both the sporting and non-sporting arenas to endorse the work of The Duke of Edinburgh’s Award Scheme and to help raise funds for it’s valuable work with young people.

Other guests included 23 yr old Andrew Cooney who earlier this year became the youngest person ever to walk to the South Pole, Yachtswoman Tracy Edwards, Major Phil Ashby who daringly escaped from captivity in Sierra Leone in 2000 and ex-England rugby star, Martin Bayfield.

James and the other special guests were seated at the Top Table and had dinner with HRH Prince Edward, The Earl of Wessex. After dinner, James spoke to the audience about the important work of the Duke of Edinburgh’s Award thanking those attending the dinner for supporting it so generously and said that he was “immensely proud to be in the company of such extraordinary people”. James kindly donated one of his gold medals from the recent FINA World Cup to be auctioned at the event. If you would like to know more about the work of The Duke of Edinburgh’s Award please visit www.theaward.org