No Athens spot for James in the 200m Butterfly 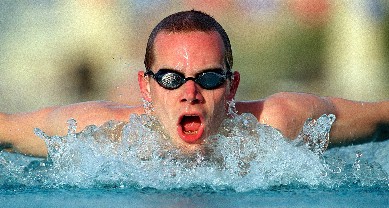 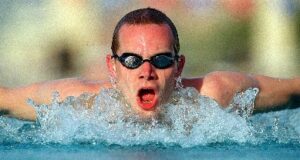 Having already qualified for Athens in the 100m Butterfly event earlier in the week, James stepped on to the blocks hoping to make the 200m event for his third consecutive Olympics. A modest swim of 2:00.41 in the heats saw James qualify second for the semis behind his great rival, Stephen Parry. The semis saw things really move up a gear and both swimmers demonstrated their class with Parry qualifying fastest in a great time of 1:56.73, with James again going second 1:58.64

The build up to the televised final was low-key by James’ standards. Normally happy to give TV interviews and talk about the prospects of another great showdown with Parry, James was remarkably quiet and focused and there was a feeling among the TV pundits that he just might sneak an Athens place while no one was looking !

Both men went out quickly and after 50m there was little to choose between them, a great turn from Hickman had him just 0.18 secs behind the Stockport Metros swimmer. After 100m, Parry was beginning to show just why he narrowly missed a medal in last years World Championships in Barcelona as he opened up a gap between himself and James, who now swims for City of Manchester Aquatics, of 0.54 secs. That gap continued to grow during the last 100m and Hickman desperately tried to stay with Parry to drag himself into a qualifying time. In the end, Parry won very comfortably and touched in 1:56.16 to secure his Athens place. James took second place finishing second in 1:58.72, the time not good enough for Olympic team selection. Mark Lewis of Stirling was narrowly beaten into third in 1:58.96

The event was likely to be James’ last 200m butterfly swim in a 50m pool after a great 200m butterfly long-course career which saw him win Commonwealth Gold in 1998. Watch out for him in Indianapolis later in the year when he goes for his FIFTH consecutive World title at 200m Butterfly short course.