Surprise Party marks the End of the Hickman Era 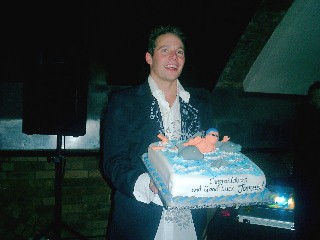 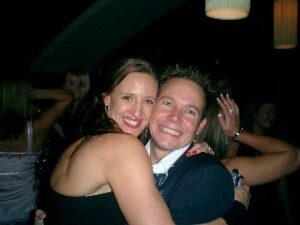 It had taken months of planning, plotting and secret phone calls but eventually James was dragged along by his Australian girlfriend Emily to a friends “birthday”. However, when James arrived he was greeted (in darkness) by a large group of family, friends, team mates, coaches and ex-coaches and even an ex-school teacher or two! They had all gathered in secret to mark the end of the James Hickman era and James totally blown away by it all.

The evening started with a “This is Your Life”, looking back over James’ childhood, school years and career with contributions from Olympic Champion Adrian Moorhouse, his great friend and rival Stephen Parry, coaches Paul Remmonds and Terry Denison and even one of James’ PE Teachers from William Hulme Grammar School. 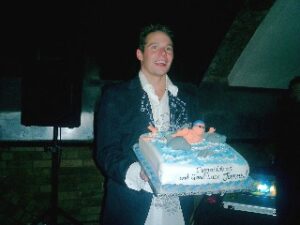 James with his Retirement Cake

Then, of course, we had the usual champagne toast and the cutting of the retirement cake which featured a miniature James complete with swimming trunks !

And no “tribute” evening would be complete without “I’m sorry they couldn’t be with us tonight but they did send this recoded message” and this night of tribute to James was no exception with telephone messages from former swimmer turned BBC presenter, Sharron Davies and Manchester City Manager, Kevin Keegan both phoning in with messages of congratulations to Dolphin Boy, although Sharron did point out to James that her job wasn’t available !!