Cow Parade gets Manchester in the Moooooood for Art!!

The world’s biggest public art event kicked off in Manchester on 14th June when more than 100 artificial cows were moooved (groan !) on to the streets of the city. As part of the event, five sporting cows were herded into the Arndale Centre including such stars as Daisy Beckham, Moootina Navratilova (they get worse !) and Johnny Milkinson.

To promote the event, James was invited into the Arndale Centre to take his place on the “cowch” where he was interviewed by local radio station Magic FM about his prospects for the Olympics and his dream of bringing back an Olympic medal to the city.

The Cow Parade runs until 12th September so if you are in the city be sure to pop in to the Arndale Centre to see the sporting cows.

After the event the celebrity cows will be auctioned for the charity, Manchester Kids. 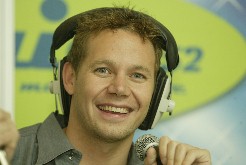 James being interviewed by Magic FM