Hickman qualifies for World Championships (25m) in Indianapolis and saves his best to last! 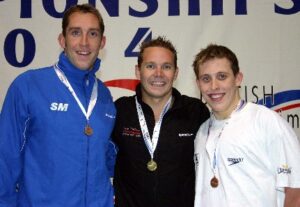 Those of you who have been following James’ career closely will know that he is the undisputed ‘King of Short Course’ (the 25m pool) ! With FOUR CONSECUTIVE World Short Course Titles to his name over the 200m butterfly distance, James was very anxious to secure his place on Team GB for the 2004 World Championships to be held at Conceso Fieldhouse in Indianapolis, USA and a chance to go head-to-head with Michael Phelps and Stephen Parry to bid for his fifth consecutive title over the 200m distance.

Having just finished competing in Athens (and while the second week of the Games were in full swing), James and his fellow Team GB members were back on a plane to Manchester to compete at the British Short Course Championships which were also the selection trials for the World Championships in October.

Stephen Parry may have been the Olympic bronze medalist but Hickman was in no mood to play a supporting role. A duo of 2004 World best times saw Hickman qualify with ease in both 100m and 200m butterfly events. In the 200m James stormed home to win in a time of 1:52.50 just ahead of Parry.

In the 100m butterfly the 28 yr old Stockport-born swimmer was in even more irresistable form, swimming another world beating time to win in a new British Record of 50.93 (and faster than his old World Record of 51.02 which he set in 1998 !!)

“It’s a nice feeling at my age to know that I am still getting faster. To swim faster now than in 1998 is fantastic and going to Indianapolis in this form gives me a lot of confidence. Don’t get me wrong, it’s going to be tough out there and taking on Michael Phelps on his home turf is going to be a real challenge but I’m up for it. I really want this fifth title”, James said afterwards shortly before jumping on a plane back to Athens for the Closing Ceremony of the Olympic Games.

The World Short Course Championships 2004 take place in Indianapolis, USA from 7th to 11th October. TV coverage in the UK will be provided by Eurosport. James will be in action in the 100m and 200m butterfly. Be sure to tune in…..