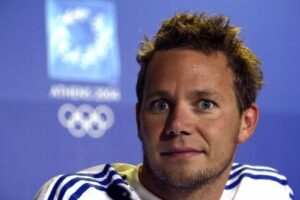 After a senior international career which spanned more than a decade, winning 36 titles on the national and international stages, 28-year-old James Hickman has finally called it a day. James had already told us earlier this year that he would retire at the the end of 2004 after the European Short Course Championships in Vienna. However, a slight shoulder injury which James picked up at an event in France in early December forced his withdrawal from the British team, effectively bringing about his retirement a week earlier than planned!

“I love the sport and have enjoyed swimming immensely but the time is right for me to retire,” said Hickman. “I’ve had a great year and I always wanted to go out on a high. I’m really looking forward to the future. I’ve closed the book on swimming and opened a new one. The direction of it isn’t known as yet but it’s so exciting. I’m exploring lots of different projects at the moment. I’m working with my sponsor Speedo, who have invested a lot in me over the years, and I’ll also be working on Manchester’s staging of the 2008 World Championships (25m). I’m very keen to get involved with the media and I’m also exploring marketing and public relation opportunities at the moment.”

When asked how it felt to be out of the pool and not having to train over Christmas for the first time in ten years, he replied:

“I’ve been out of the pool just a week now so I really don’t know how to feel. It’s hard to imagine it’s permanent at the moment but I’m sure the next time I go to an event and see what other swimmers are doing it will really hit me. The sport has become more and more professional as well as a whole lot tougher during my time but I’ve really enjoyed the challenge this brings. I will miss it badly but it’s just the start of something new.”