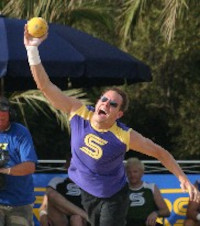 The other competitors in James’ heat were:

James was delighted to be invited to La Manga in Spain to take part in the new series of the legenday all-round sports TV show “Superstars”.

James took part in Heat 3 of the Mens Competition which was broadcast by BBC on Sunday, 6th February.

James was battling against a group of leading athletes from across the sporting spectrum for a place in the Superstars Final.

Unfortunately, not all of the events suited James and despite an excellent performance in the gym tests which saw him pick up seven points for second place behind Alain Baxter, James only finished sixth in the heat with seventeen points overall and as a result didn’t manage to qualify for the Superstars Final.

James also managed to pick up points in the football, cross-country run and 100m sprint.

The final standings in the heat were as follows: