No place in Olympic Final for James 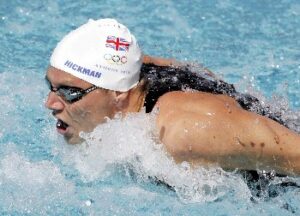 It just wasn’t to be for James at the Athens Olmpics, although it wasn’t for lack of trying. Having set a new Personal Best of 52.79 at the Olympic Trials in Sheffield to claim his place on the team, James stepped forward in Athens with a new found confidence and belief having come through a couple of poor years where he even dabbled in retirement.

As 15th ranked 100 fly swimmer in the World this year, Hickman was drawn in the seeded heats, eventually swimming in Lane 2 of Heat 7. With Phelps (USA), Huegill (AUS), Rupprath (GER) and Yamamoto (JAP) all in the same heat, James knew it would be a competitive swim and the game plan was to forget about the times and just race against the “big guns” knowing that a good race performance would probably be enough to get him through to the semi finals. In the end, Hickman came in sixth in a very strong time of 52.91 just over 0.1 outside his best time, with the heat having been won by Phelps in 52.35. The time was good enough to give the 28 year old Stockport-born swimmer 12th place overall and an all-important semi-final spot.

Going in to the semi-final the pressure was enormous. James knew that nothing less than a personal best was going to be good enough to get him a coveted spot in the Olympic Final. “This is my third and last Olympics and I really want to make the final”, he told the BBC’s Sharon Davies just minutes after his morning heat. At the first turn the race was really tight but James just faded in the last 15m, not having the finish to match the likes of Serdinov (UKR), Draganja (CRO) and Yamamoto (JAP), eventually touching in seventh place in a time of 53.10, fractionally slower than his morning heat but still well-up with his best ever 100m fly times. In the end, all eight swimmers in the second heat finished faster than James, pushing him down to 15th overall which meant no final spot. “I’m a bit disappointed”, he said afterwards. “It was a just a fraction slower than this morning and I knew I needed to be just a few tenths faster to give myself a chance. But I’ve had a great year and I’m looking foward to Indianapolis in October and a chance to go for my fifth World Short Course title. It’s been great competing in my third Olympics here in Athens but I’ve decided to retire on 31st December so it will definitely be my last”, he told JamesHickman.com