“There’s life in the old dog yet”….James qualifies for his third Olympic Games 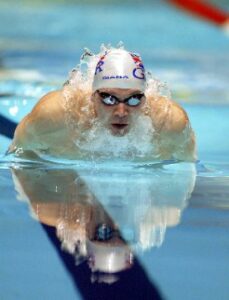 hat’s what butterfly swimmer Stephen Parry said about his friend and rival after James qualified for his third consecutive Olympic Games at the Olympic Trials in Sheffield’s Pond’s Forge International Pool last night. With his preferred event now being the 100m butterfly event, James was in action on days one and two and it looked strong right from the start. With the Qualifying Time set at 53.0 secs (the eight fastest time in the world in 2003), James knew he had to be close to his best in order to make the team, his own Personal Best in the event being 52.9 secs, just inside the qualifying mark. In the morning heats the 28 year old swimmer, now based in his native Manchester, looked comfortable and came home first in 53.54 secs. In the evening semi’s, Hickman again looked comfortable as he edged closer to the qualifying time, making the final as the fastest swimmer in 53.14 secs.

The final on day two saw the usual suspects line up for the event……Hickman, Parry, Cooper. It was a terrfic race with James and Stirling’s Todd Cooper both matching each other stroke for stroke down the last 25 metres. In the end the young Scot was just too strong, despite a great finish from the veteran, touching first in a new British Record time of 52.46 with James just behind in 52.79 a new personal best and good enough to break his old British Record. The two swimmers left the rest of the field for dead with third place going to Matthew Bowe of Bath University who finished in 53.76.

“I’m chuffed to meat balls”, James said afterwards. “I’m not disappointed about finishing second, Todd swam a great race. The important ing is that I proved I’m still good enough to make the grade. Some sections of the press were beginning to question whether I still had what it takes and I think this performance answers them. It wasn’t just the final, it’s been a strong series of swims over the two days and that’s given me a lot of confidence. I might be getting older but I’m still getting better. Just a like a good wine !!”

Watch out for James in the 200m butterfly event on Saturday and Sunday.