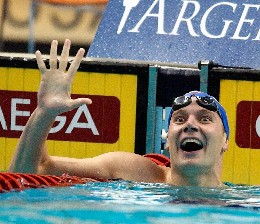 From the moment Michael Phelps withdrew from the World Short Course Championships in Indianapolis through injury there was never any doubt about the result. It was almost as if the swimming God’s were plotting in James’ favour. The only man who could stop the 28-year-old British swimmer from adding an incredible and unprecedented FIFTH consecutive World 200m Butterfly short course title had been removed from the equation and the gold medal effectively handed to James Hickman on the proverbial plate ! To finish his career on this historic high means more to James than most people can imagine and it’s something that he has been thinking about ever since title number four was added in Moscow in April 2002. Mentally, he had been preparing himself to take on the great Phelps and what the result of that head-to-head would have been is something we will never know.

With Phelps taken care of, there were still the formalities to be taken care of on the day. Having mis-judged his qualification slightly, Hickman found himself only third fastest going into the final with a time of 1:55.11 which meant that he started the final in a less-than-perfect lane three behind Skvortsov (RUS) and RAAB (USA) in a pool that Hickman had described as “choppy”.

When it came to the final itself, however, Hickman was in no mood to let things slip. Leading from start the start, he was almost a full second ahead of the field at the 100m stage and had increased his lead even further with just 50m to go. Although, in the last 50m the 28 year old Stockport-born Hickman clearly eased off, he still took gold comfortably touching in 1:53.41 almost a full second slower than his winning time of 1:52.50 at the British Championships at the end of August but still the third fastest time in the world this year. Iaon Gherghel (ROM) took silver in 1:54.06 and Wu Peng (CHN) took bronze in 1:54.51.

“This means so much to me”, Hickman said afterwards. “This is my piece of swimming history. Maybe the time would have been a bit faster if I hadn’t eased off in the last 50m, but I knew I had done enough. It’s a shame that Michael couldn’t swim, I would have enjoyed that but that’s life. We’ll never know what the outcome would have been but but I’ve got my fifth World title now and that’s all that matters. I’ve always wanted to finish my career swimming well and this has been a great year for me. I think so many people had started to write me off. Winning this is a great retirement present!”